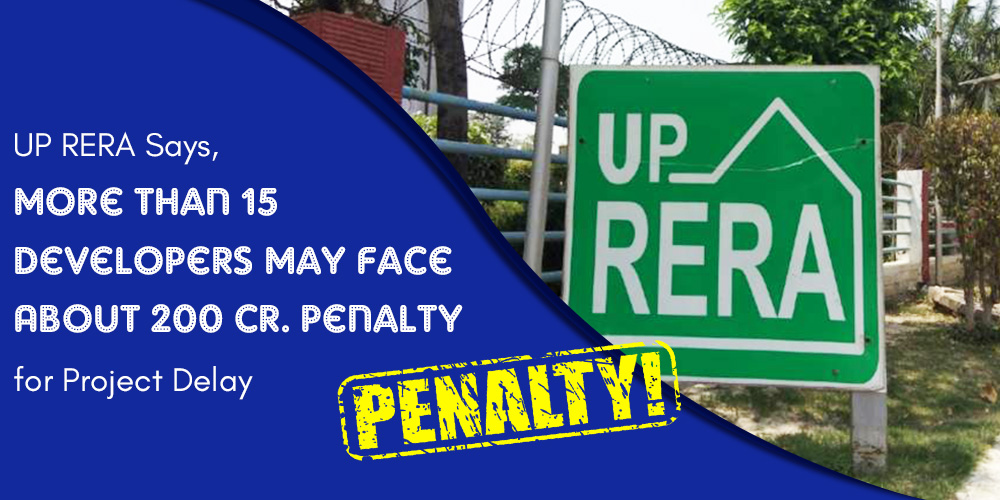 Noida, 4th October 2019: The Uttar Pradesh Real Estate Regulatory Authority (UP-RERA) on Thursday announced that they have identified 22 such projects wherein the real estate developers failed to offer possession as stated in their affidavits in the court. Under Section 63 of the RERA Act, these 22 developments are of more than 15 promoters which may face a penalty of 5% of the total project's cost.

Newtech Promoters and Developers may face a penalty of about Rs. 12 crores, Ajnara Realtech of over Rs. 30 crores, Logix City Developers of Rs. 7 crore, Assotech of about Rs. 15 crores, Earthcon Universal Infratech of Rs. 33 crore, Patel Advance JV of Rs. 27 crores, among others. If the responses are considered to be inappropriate then a penalty will be levied on them, RERA added. All the promoters of these projects have been called for a meeting with the secretary, UP-RERA on October 23, 2019, at Greater Noida regional office.

The regulatory Authority has identified about 397 such projects in Noida, Ghaziabad, and Greater Noida. And, these 22 projects are of the 397 projects that the authority has recognized in the National Capital Region (NCR) where the possession has been delayed. Further, notices to promoters of the remaining projects would be sent at a later date regarding non-compliance with the court orders, according to Real Estate News Noida.

Showcase notices have been issued by UP-RERA to the Ghaziabad development body which may face Rs. 1.39 crore penalties and even to the Greater Noida development which may have to pay about over Rs. 3 crore.

As the laws are becoming stringent in the real estate industry, we can expect a healthy real estate market for property buyers. Real estate Developers in NCR that are failing to comply with the rules and regulations of the RERA are facing ire of the Government Authorities, as per the Property News Noida.

Of late UP-RERA has been in news for setting a perfect example to bring real seriousness among the builders so that they adhere to the compliance. And, in this way buyer rights can be safeguarded.  Thanks to RERA it has made a huge difference in the industry since its introduction.

The main aim of the Act is to offer much-needed security to homebuyers against the shark lobby of real estate developers. Further, to bring transparency in developing a project and in its execution.