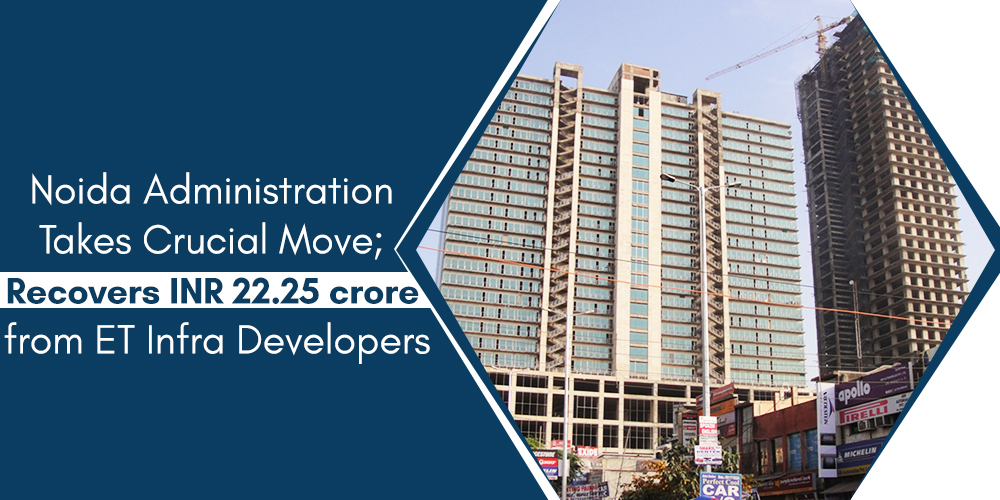 A very concrete step has been taken by Gautam Budh Nagar administration as the administration has to recover INR. 1,200 crore from the real estate developers and other Organizations on behalf of the authorities - Greater Noida, Noida & Yamuna Expressway.

Noida, 25th September 2019: In this crucial moment, when many non-complying real estate developers are flouting the rules and regulation of the real estate law, Gautam Budh Nagar administration has shown the ray of hope amid darkness.

As per the latest Real Estate News Noida, Gautam Budh Nagar administration has successfully recovered INR. 22.25 crore from Noida based ET Infra Developers. It is a big step for the administration as it has to recover massive INR. 1,200 crore from real estate developers and other Organizations on behalf of the authorities- Greater Noida, Noida, and Yamuna Expressway.

According to Officials of Gautam Budh Nagar administration, the admin would begin the process of attaching unencumbered and immovable properties of the developers who have defaulted on payments and then auction them online to recover the pending dues for the authorities.

The announcement of the recovery of INR 22.25 crore from ET Infra Developers Pvt. Ltd. made on Sunday by District Magistrate Mr. BN Singh. "The builder owed this amount to the Noida Authority as land lease rent. There is huge pressure from the authorities to recover dues, but the realities of the market are different. There is a dearth of liquidity among builders. It is a cumbersome task to recover these financial dues from defaulting developers, but we will be implementing our recovery mechanism stringently," BN Singh commented.

Among the recovered INR. 22.25 crore, INR. 21 crore was the principal amount due to the Noida Authority and INR. 1.25 crore was the total interest in it. The concrete step has been taken by the district administration to tackle the builders excuses of lack of funds and unsold flats- now, the district administration will work in sync with the state's Real Estate Regulatory Authority (RERA) in order to prepare a list of such assets and then eventually put them up for auction.

As per the officials of the department, the funds generated through this process will also be used to repay aggrieved home buyers of the delayed projects.

The Gautam Budh Nagar administration has effectively made numerous financial recoveries for UP-RERA in the past one year. The regulatory body has so far sent the administration 616 recovery notices, of which about 107 notices have been addressed to date and 109 returned to RERA without recovery.

The administration has so far recovered INR. 26.2 crore from various real estate developers in total and the same is deposited with UP-RERA.

According to the Real Estate News Noida Extension, Sector-16 based real estate firm ET Infra Developers submitted fake court documents to avoid paying the due amount to the Authority. On July 20, the allottee had given a document dated March 14 allegedly from the High Court to the Noida authority which stated that the court had waived off the interest and the remaining loan, but later it was found that the document was fake as no such order had been passed by the court. A case has been registered at the Sector 20 police station about the submission of fake court documents to avoid paying the dues.