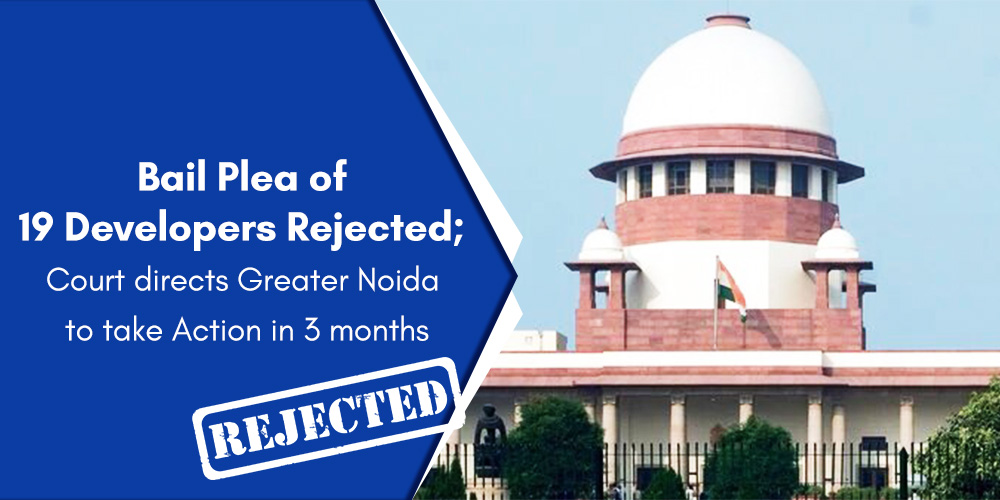 Anticipatory bail pleas of 19 builders have been refused by the Court, this case is linked to illegal construction of high-rise buildings in Shahberi village located in Greater Noida.

Noida, 23rd September 2019: Dismissing the bails of 19 real estate developers on Tuesday, the court has directed district administration, Greater Noida Industrial Development Authority (GNIDA) and Police Department to take strict action within 3 months against their officials who failed to check illegal construction in the area.

It has been observed that the construction and sale of flats and houses were done illegally in this region of Greater Noida, notified by the GNIDA in 2013. Shahberi is a Greater Noida village located about 46.6 km from Delhi.

The authorities woke up from their sleep when a twin-building collapse case happened. On July 17, 2018, at least nine people have died, including a child and two women when two buildings collapsed in Shahberi village in Greater Noida area owing to poor construction material and due to too much moisture in the walls of the basement. Lately, there has been a great spike in building illegal constructions in the nearby cities and villages in closer proximity to Delhi.

In 2014, The Allahabad High Court too had upheld that the region concerned to illegal construction in Shahberi belonged to the GNIDA. It also pulled up the local authority, administration and police officials for being mute spectators in these 4 years while illegal constructions of high-rise buildings mushroomed.

Based on the first impression, it appears that the accused developers (bail applicants) failed to comply with the high court order and came up with illegal constructions on the plot and sold them off illegally. Some of the accused developers applied for an anticipatory bail in the court on the argument that the land was their private property and the construction including getting lifts, sewer connections, and electricity in buildings was done through a proper process.

The construction of the highrise buildings is a process of several years and could not be done overnight. The untoward incident of Shahberi village led to the loss of innocent people’s lives and the loss of their hard-earned money, the court added.

According to Real Estate News Noida, connected to illegal constructions in Shahberi and in close by areas, more than 50 FIRs have been registered against non-complying developers. So far, more than 50 people have been arrested and around 257 people have been accused in these fraudulent cases. Near about 1,500 such illegal buildings are said to be present in the region that needs to be demolished.