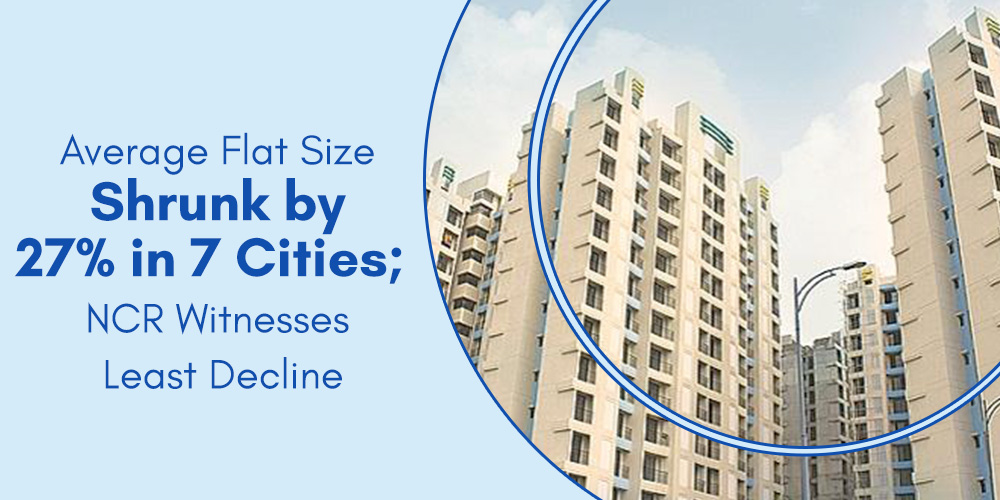 Over the past five years, NCR sees the slightest decline of 6%; on the other hand, Bengaluru, Chennai, and Hyderabad have witnessed a size reduction of 9%, 8%, and 12%, respectively.

Noida, 29th September 2019: Gurugram Based – ANAROCK, one of the leading real estate experts with diversified interests across real estate value chain has disclosed its research saying that in seven major cities, the average area of residential apartments has shrunk by 27% over the past five years however dimensions in the National Capital Region (NCR) have dropped only 6%.

According to Real Estate News Noida, NCR has witnessed the least decline in the average apartment sizes. Earlier the developers were developing projects on the usual wisdom of ‘Bigger is Better’, however, they have now reformed their old strategy into developing moderate unit sizes across seven major cities in the country.

A lot of factors are responsible for this change but mostly factors such as changing buyer preferences, the liquidity crisis, and growing concerns about affordability have forced the real estate developers to think out of the box.

Delhi-National Capital Region (NCR), Mumbai Metropolitan Region (MMR), Pune, Bengaluru, Chennai, Hyderabad, and Kolkata - these top seven cities have seen the reduction in average apartment sizes by 27% over the past 5 years from 1,400 Sq. Ft. in 2014 to nearly 1,020 Sq. Ft. in 2019 so far.

Hyderabad, Chennai, and Bengaluru have seen a size reduction of 12%, 8%, and 9% respectively, for five years. During this period, Pune registered a 38% reduction in size, with the average apartment size currently at 600 Sq. Ft. The average sizes in both Pune and MMR are calculated on the carpet area, whereas if you look at the remaining cities it is based on the built-up area.

As per the Property News Noida, one of the real estate experts said a lot of people think NCR is one of the worst-hit residential markets but amazingly it has seen the least decline of 6% during this tough period which is a positive thing for the market.