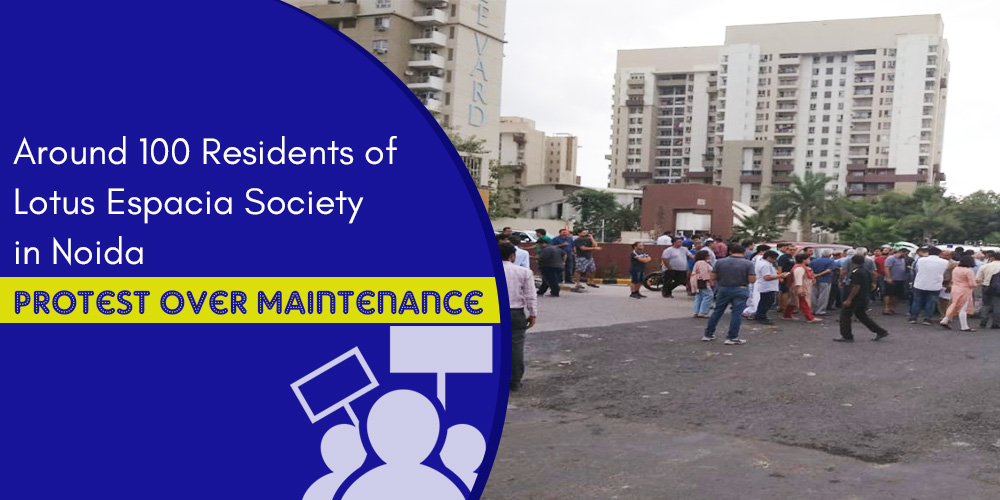 Despite the order received in July by the Noida Authority to give away the charge of maintenance to the association, the developer had refused to do so, said Members of the apartment owners’ association.

Noida, 7th October 2019: The maintenance issue came into the surface when about 100 residents of Lotus Espacia society in Sector 100 Noida clashed with officials of the maintenance agency over the appointment of a new security agency.

According to Real Estate News Noida, more than two and half months have been passed since the regulatory order received in July by the Noida Authority to handover the charge of maintenance to the association, however the real estate developer had refused to do so till date, members of the apartment owners’ association said while sharing their grievance.

The developer has water dues to the tune of Rs. 88 lakh till July 31, 2019, according to a notice issued by the Jal department to Cloud 09 Projects. The apartment owners of Lotus Espacia society said that the developer owed lakhs of rupees in electricity dues and they had been facing long outages over the past few days.

Pointing developer’s irregularities, the residents had also complained about a non-functional STP in the society, owing to which the builder had been fined Rs. 18 lakh by the UP Pollution Control Board.

Executive board member of the AOA, Pawan Ghavri complained that they have approached the Sector 39 police multiple times between July and September in regards to handover of the responsibility of maintenance to the apartment owners’ association, as directed by the Noida Authority however they have not been entertained at all and police refused to take their complaints. On September 27, too, they have informed police but, got no positive response, as per the Property News Noida.

The flat owners gathered outside the maintenance agency’s office on Sunday and reiterated their demands. But, hired bouncers at the agency — Gravity prevented residents from entering the office. When the situation turned ugly, police personnel arrived at the society in four vehicles and convinced the agency to give away the maintenance charge to the residents of the building in keeping with Noida Authority’s order.

Senior sub-inspector Sudhir Kumar Singh of Sector 39 police station informed that the developers had approached the high court against the AOA, but did not get a decision in their favor. The General Secretary of the AOA, Captain Hemant Rudra shared that the developer had been absconding since June 2018 and the facility management of 3C Company had deserted the complex in June this year.

Whereas the estate manager of Gravity, Neeraj Sharma said they had handed over all maintenance responsibilities to the residents.

Three directors of 3C Company, which owns the Lotus brand, were arrested by Delhi Police on charges of duping homebuyers last year in November.