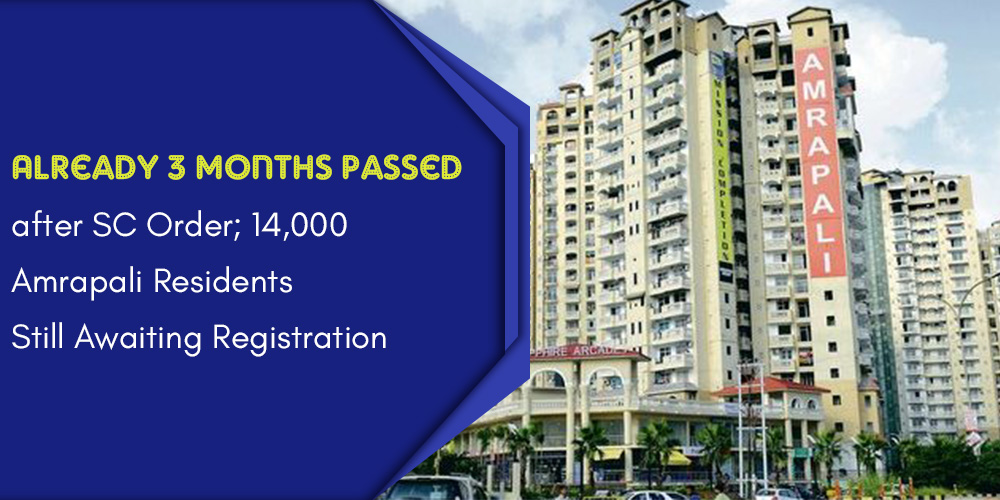 Some of the flat buyers in Amrapali Sapphire who submitted documents to validate their ownership said that the process is taking longer than expected.

Noida, 6th October 2019: Most of the apartment buyers from Amrapali Sapphire are not at all happy with the progress of the registration process. They claimed that the wait has dragged on longer than expected.

According to Real Estate News Noida, three months back the Supreme Court (SC) has directed Noida Authority to kick off the registration process for 14,000 residents of several Amrapali projects. But, still, about 14,000 Amrapali buyers await registration.

This news came into light when some of the buyers from Amrapali Sapphire residential development, who queued up for the registration process and were submitting the documents to authenticate their ownership, showed their frustration by saying that the process is taking huge time more than usual.

Whereas as per the apex court order passed on July 23, it specifically mentioned that Noida and Greater Noida Authorities need to complete all registration work for the 14,000 residents of the property in one month.

One of the experts on the subject said that a lot of issues cropped up when the verification process began and this has led to a great delay. On the 23rd of this month, it will be three months since the original order was issued by SC. The residents have been waiting for long, hoping this issue gets resolved soon.

The registration was expected to be conducted based on fresh tripartite agreements drawn between the buyer, the authority and the court receiver, who would then appoint a signatory. The SC had instructed National Buildings Construction Corporation (NBCC) Limited to complete the residual utility connections to assist the buyers to secure the registration.

In a letter to the Noida Authority in September, Court receiver R. Venkatramani had declared a tentative sequence of registration -- Sapphire I, followed by Sapphire II, Eden Park, Platinum, and Titanium, Zodiac, Princely Estate, Silicon City Phase I, Castle, Grand, and Leisure Valley.

Some of the buyers have received a verbal reassurance from Venkatramani on Sunday night about the registration commencement. It is expected to begin from the coming week, as per the Property News Noida.

Further, some Amrapali buyers have raised complaints about discrepancies in the floor area ratio (FAR) allocation of the apartments. Multiple discrepancies in the allocation of the Amrapali flats have been found. The final apartments do not measure accurately as they are supposed to be in the builder-buyer agreements in many cases. Hence, in case of the apartments constructed smaller, buyers should only be asked to pay for the area they have been given finally.

vamtam-theme-circle-post
 Category News
Some of the flat buyers in Amrapali Sapphire who submitted documents to validate their ownership...
 Tags News, Noida property news, Property Consultants in Noida, real estate consultant noida, real estate news Noida
Read More

Fill the Form to Speak to an Expert
Fill the Form to Download Report
Fill the Form to Download Brochure
Buyer can Approach UP-RERA Even if OC & CC have been Issued to a ProjectAround 100 Residents of Lotus Espacia Society in Noida Protest Over Maintenance